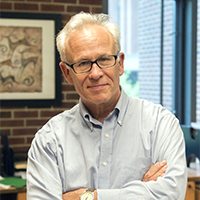 Peter Hudson is a Willaman Professor of Biology, and his research focuses on the ecology of wildlife diseases, including animal diseases transmissable to humans. His research group uses a mixture of fieldwork, laboratory studies, and mathematical modeling to explore disease dynamics. The group focuses on epidemiology and population dynamics, disease and infection diversity, and parasite Interactions. Hudson’s work has implications for the control of wildlife diseases and of emerging animal diseases transmissible to human populations.

5,000 Gray Wolves Are Better Than None

"He [Peter Hudson] said that the Yellowstone wolves are healthier now, less affected by mange or canine distemper. Their numbers are down from a peak a few years ago, he said, because they have less food. When the wolves were brought back to the area, there had been an exploding population of elk, so the food was superabundant and the wolves reproduced fast. But the elk changed their behavior, he said, fanning out and moving to other areas. So wolf populations shrunk, and that means Yellowstone is not, as some ranchers had feared, a source of wolves that would emerge from the park and eat nearby livestock."

"Healthy ecosystems are full of parasites," he said. The reintroduced wolves had no natural immunity to these diseases, but eventually he thinks the disease organisms and the wolves will strike a balance, according to Peter Hudson.

"Our hypothesis is that pack-mates are able to offset the survival costs of infection with mange -- and perhaps other infections -- by assisting with food acquisition and territory defense," said Peter Hudson.

Peter Hudson recognized as 'Humanitarian of the Year' by Kish Bank

The Virus in the Cupboard: Hunting pathogens close to home