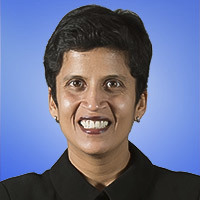 Professor Shoba Sivaprasad Wadhia is an expert on immigration law whose research focuses on the role of prosecutorial discretion in immigration law and the intersections of race, national security and immigration. She has published more than 30 law review articles, book chapters and essays on immigration law. Her work has been published in Emory Law Journal; Texas Law Review; Washington & Lee Law Review, Columbia Journal of Race and Law; Notice & Comment, Yale Journal on Regulation; Harvard Latino Law Review; Connecticut Public Interest Law Journal; Georgetown Immigration Law Journal; and Howard Law Journal. Her scholarship has also been cited to by federal court judges, including Judge Richard Posner and Judge Paul J. Watford. Wadhia’s first book, Beyond Deportation: The Role of Prosecutorial Discretion in Immigration Cases, was published by New York University Press in 2015, and named an honorable mention for the Eric Hoffer Book Award. Her second book, Banned: Immigration Enforcement in the Time of Trump, was released on Sept. 10, 2019, by New York University Press. Her immigration textbook, Immigration and Nationality Law: Problems and Solutions, with co-authors Steve Yale-Loehr and Lenni Benson, will be published by Carolina Academic Press in 2019.

In 2018, Wadhia was named the inaugural Editor-In-Chief of the American Immigration Lawyers Association (AILA) Law Journal, a partnership between AILA and Fastcase. In 2019, she served as the Enlund Scholar In Residence at DePaul University School of Law. Her scholarship has been cited more than 450 times by other scholars as measured by Google Scholar, and by federal appellate court judges, including Judge Richard Posner (article on deferred action), Judge Paul J. Watford (article on the role of discretion in speed deportation), and Judge Kim McLane Wardlaw (“See generally” citation to book Beyond Deportation).

At Penn State Law, Professor Wadhia teaches doctrinal courses in immigration and asylum and refugee law. She is also the founder/director of the Center for Immigrants’ Rights Clinic (CIRC), where she supervises students in three areas: 1) community outreach; 2) legal support in individual immigration cases; and 3) policy work for institutional clients. CIRC has earned a national reputation for its high-quality work product and impact in the community. Since the presidential election of 2016, CIRC has reached hundreds of individuals and families and served as a clearinghouse on changing immigration law and policy. CIRC was honored with the Excellence in Legal Advocacy Award in 2017 by the American-Arab Anti-Discrimination Committee and named legal organization of the year in 2019 by the Pennsylvania Immigration Resource Center.

Prior to joining Penn State, Professor Wadhia was deputy director for legal affairs at the National Immigration Forum in Washington, D.C. She has also been an associate with Maggio Kattar, P.C. in Washington, D.C., where she handled asylum, deportation, and employment-based immigration benefits matters.

from The Philadelphia Inquirer September 4, 2021

"During the Sept. 11 terrorist attacks, I lived in Washington, D.C., and worked as an immigration attorney. I remember it as a day of tragedy — and as a day that would normalize a national narrative conflating immigration with terrorism, shift the discourse to “us” vs. “them,” and unleash a litany of immigration policies developed in the name of national security but with negative consequences for Muslim, Arab, and South Asian communities."

from Inside Higher Education January 21, 2021

"I'm thinking in particular of someone who's undocumented and on a college campus or someone with DACA or TPS who’s going to school or working at a university pursuant to work authorization.They are either in a tenuous or a temporary status today."

from The Philadelphia Inquirer January 20, 2021

The Meaning of DACA

"DACA will be reminisced as a story about human pain and hope. Said one DACA recipient one author spoke to described September 5, 2017, the day the end of DACA was announced as “just an awful day … Eventually you just get over the pain, get over the fear… and you continue to organize and protect your community in whatever way you can.” Throughout the time DACA has been tossed around in the courts, thousands continue to build families of their own, work in the frontlines of healthcare. and revitalize classrooms in colleges and universities across the country, a phenomenon we have seen first-hand as educators and administrators. DACAmented recipients are now our doctors, lawyers, and schoolteachers, repaying the investment this country has made in them."

“I think the effects would be devastating — morally, legally and to the individuals affected,” said Shoba Sivaprasad Wadhia, director of an immigrant rights clinic at Penn State Law.

"The human impact of the ban has been profound across the U.S. and in Pennsylvania. U.S. citizens married to a spouse from a banned country have been separated for months and even years. Similarly, students admitted into top-rate programs at universities are prevented from studying in their field because of the ban. And parents or grandparents who wish to come to the U.S. to watch their daughters and sons graduate from college or visit their grandchildren for the first time have been unable to do so," writes Wadhia.

Op-Ed: Deport, not court? The U.S. is already doing that

“The solicitor general stated that some 431 people had received a waiver. That is a drop in the bucket for the thousands of people who are covered by this ban,” Penn State law professor Shoba Sivaprasad Wadhia told the PBS NewsHour. “And I think it’s raising serious concerns and questions about whether it’s actually working.”

Flow chart: What happens next to Trump’s travel ban?